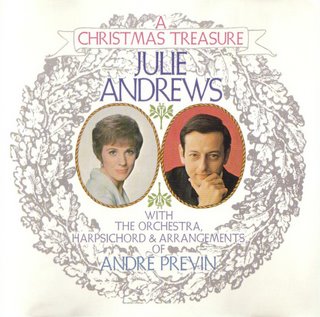 Whenever I get the chance to visit Chicago (like I did this past weekend), I try to find some time to check out the used CD stores in the area.

I'm sorry to report that on this trip I discovered that one of my favorite used CD stores - the Compact Disc Trading Post of Merrillville, IN - has closed its shutters for good. Many used Christmas CDs were found in this place over the past six years.

To the girls who work at the Subway located next to the former location of the used CD store: Just because your former neighbors moved away doesn't justify my moaning in agony, tears flowing, and the kicking and screaming I displayed in booth #6. I apologize for my actions.

I then travelled to another used CD store that keeps a box of Christmas CDs under the "Religious / Easy Listening" bin. While many used CD stores choose NOT to buy or display Christmas CDs, this store does exactly the opposite (to that I say BRAVO!).

This CD you're looking at was buried deep within the box. A quick scan of the back cover tells me that this album was originally recorded in 1966, released at Christmas, 1967, and released onto CD in 1990. An ORIGINAL PRESSING! WOW! Price = $5.00.

A quick word on original pressings: Between the advent of the compact disc in 1983 to around 1995, many record companies issued past catalog recordings onto CD on a yearly basis. If the album sold, they would bring it back the following Christmas. If it didn't sell, it went out of print, never to return, and the Christmas CDs would rise in value dramatically.

Example? The original pressing of Herb Alpert & The Tijuana Brass' Christmas Album was always a hot item on eBay. If a copy sold under $50, you got a bargain. This all bottomed out last year when the remastered version of this same CD was released. What would Julie Andrews and Andre Previn fetch now? Only time will tell. It's a moot point since I'm never going to sell this one anytime soon!

This is an interesting album. Two big mainstream artists both sharing their talents to fuse together an unforgettable experience in music. Julie Andrews possesses one of the rarest voices known to man: a five-octave coloratura soprano talent (ranging from C3 to E7). Andre Previn is one of the most prolific artists in classical music and film scores.

Some of the arrangements on this album make it sound like "Dueling Banjos" - first Previn & orchestra plays for one minute, enter Julie to sing the first chorus, repeat. As they continue, both get louder and more screechy. Julie hits the high note, Previn & orchestra crescendo, and thankfully the song is over.

As I type these words, I'm relistening to the CD again, trying to find a song that doesn't utilize this arrangement. Two instrumentals on this album give temporary relief: "O Little Town Of Bethlehem" and "Greensleeves (What Child Is This?)" but the rest stick to the formula. Disappointing? Very. Now I can understand the rationale behind the record companies not releasing these on CD anymore.

If you check this discography under 1966 you will see the original cover. This album was produced under the direction of Firestone stores and sold exclusively in those businesses. I suspect there was a TV special that year with Julie Andrews that also used the songs. That was typical marketing for this type of thing, produce a TV show, air it then sell albums of the songs from the show at your store.
Really good music that has survived the years.

Hit - By and far Firestone's biggest selling Christmas album, it was the first time Dame Julie Andrews (just plain Julie then) had recorded anything Christmas!

Thanks for the additional info Hit!

This has since been rereleased on CD, remastered, renamed, recovered, and re- whatever the word is for "changed". They call it "Julie Andrews Greatest Christmas Songs." Apparently the remastering is marvelous, but for reasons unfathomable to anyone, they tacked on three definitely NON-Christmas songs to it. Whatever. Check Amazon, order, & enjoy all over.