Around The Christmas Tree - A Special Christmas Day Program 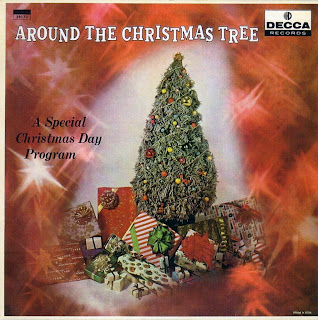 I've never been a big fan of the "various artists" Christmas compilation. In many instances (i.e. Goodyear, Firestone, True Value, or anything by Columbia or Capitol Special Products), it's usually the same rehashed stuff with the same rehashed songs. So when I first noticed this compilation, I thought "another various artists" comp. But when I noticed the familiar Decca logo atop the album, I began to look a little closer.

Glad I did. A quick check of the LP looked like this had just been opened (you could eat off the album). And this nifty compilation contains artists that you normally don't get on comps (Dick Haymes, The Four Aces, Axel Stordahl, Vincent Lopez, Owen Bradley, even the Shulmerich Carillon Bells!).

I found this album at a garage sale sitting on a table bathed partially in the Indiana sun. This made the sale tag on the front cover fuse with the cover, resulting in a scab on the front cover (Note to all garage sellers: vinyl & sun don't mix!).

Despite much research via the almighty Google, I couldn't find a release date on this one. Judging by the record label number, I'm wagering late 1950s - anyone have the real answer?


Around The Christmas Tree - A Special Christmas Day Program

Also, I'm kind of a reverse purist...I like my cover arts with the divots and coffee stains unretouched. Just sayin'.

Stubby - Thanks Stubby for the year and revealing your preference on coffee stains (hehe)!

This is scarey, I actually have a very, very old, worn sleeve/album of this one. I've never seen it since my mom gave it to me when I was about 7; this is so great to share. Thanks.

I'm really excited about this - some of my all-time favorite holiday LP's have been on Decca -- Sammy Kaye, Jan Garber, Guy Lombardo to name a few.

Are you channeling Kup?

Scooter - Glad to have helped you reconnect with those memories!

PDMan - Don't forget Owen Bradley (there a hint of what's being shared out next)!

Scott - If I was channeling Mr. Kupcinet, then my name is Rob Martinizing!

Not the greatest touch-up, I'm afraid (still working on improving my Photoshop skills), but I've posted a de-divotted version at www.wordofnow.com/around+the+christmas+tree+-+A.JPG

Here's a fixed and color enhanced image:
Around the Christmas Tree LP Front.

Thanks for this- never heard of it, but it sounds good.

Check it out. One cover, one title, two different collections on Decca...

It's spooky! Like discovering your evil twin. And, I'm afraid to say, I don't know which of these is from 1957...unless they both are.

Right now, there's a bunch of CDs being marketed with the same generic titles but with different radio station call letters. And there's a lot of differences in the track listings. Any way this was an earlier example of regional marketing?

Track six appears not to be working (at least for me).

And further proof that we need a wiki at FLLLL.

I know you'll be taking down your shares soon, but I just downloaded this one. And as centerclos above said, there is something wrong with track six. Is there any way you can fix it? Thank you for all of the wonderful Christmas music and Happy New Year!

The Judy Garland website thejudyroom.com maintains that Decca DL 9056 was released in 1958, which is also possible.

The second album by this name was the one featured here, Decca DL 38170. I think it was released in 1959, because it contains tracks from Axel Stordahl's Christmas In Scandinavia LP, which was released by Decca in 1959, and in fact reviewed in the 12/7/59 issue of Time magazine.

Randy - Thanks for the info, my good man!

As you suspect, this LP wasn't sold in record stores. It's my memory that this was a premuim from S & H Green Stamps (or Blue Chip Stamps?)

For those too young to remember, you'd get one stamp from your supermarket or gas station for each 10 cents you spent. You'd paste the trading stamps into a book until the book was full. You'd then take the filled books to a "redemption center" and use them as cash for merchandise. The more books you turned in, the better your premium.

What's the possibility of getting this one reposted? I know you're busy, but somehow I missed this one! If so great, if not, thanks anyway for the great blogs!