Showing posts from March, 2006
Show all

Here's a new subgenre of Christmas music that I've added to my collection - Christmas carillon music. Last December, I've began searching my local Goodwill, Salvation Army, antique stores, vinyl resale shops, and garage sales for unique Christmas music that I can digitally transfer over. I found a RCA Victor "Living Stereo" album cover entitled "A Christmas Sound Spectacular" by John Klein at a local Goodwill (no record enclosed unfortunately) that piqued my interest. Thankfully, I found a site that sells this very CD and ordered up a copy. I then found this album over at Vinyl Orphanage last December when they shared a bunch of wonderful Christmas albums. Down in Lake Wales, Florida is the Bok Tower Gardens (now Bok Sanctuary) - a sprawling area of bliss established by noted American author Edward Bok and designed by the famous landscape artist Frederick Law Olmstead, Jr.. After the last garden was planted and watered, Bok sensed something was
5 comments
Read more 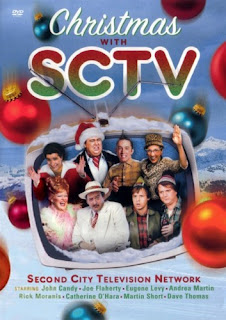 Okay... technically, this is NOT a Christmas CD... but I did receive it for Christmas and wanted to share some of the treasures that lie inside. In the 1970s, the Second City Comedy troupe based in Chicago and Toronto was a breeding ground for the next wave of great comedians: John Belushi, Gilda Radner, Dan Aykroyd, and Bill Murray. While these four went off to immortality at "Saturday Night Live", the other members of Second City banded together and created their own TV show in Canada. "Second City TV" was seen throughout Canada (and in syndication in the USA) between 1976 and 1980. Joining this cast were John Candy, Joe Flaherty, Eugene Levy, Andrea Martin, Rick Moranis, Catherine O'Hara, Martin Short, and Dave Thomas. In 1981, NBC needed a summer replacement for its music program "The Midnight Special". They brought SCTV in, gave them a 90 minutes to fill, and "SCTV Network 90" was born. This ran from 1981 to 1983 - winning two
Post a Comment
Read more

During the week of February 19th and February 24th , I reviewed six different Christmas compilations that I acquired from various friends and other Christmas music aficionados. I had no other homemade compilations to review... or so I thought. Mike Ung, a resident of Kansas City and yet another person who I met through FaLaLaLaLa.com happened to read my reviews. He e-mailed me to ask if I would be willing to trade copies of our annual comps. "I've always liked weird/obscure music" Mike admits. He also admitted to reworking the Beatles' White Album down to 6 tracks... That was enough for me! I agreed to send him one and off they went through the mail. His compilation arrived exactly one week ago. I didn't know what to expect - this was Mike's 5th Christmas comp. The artwork was pretty good - I did a quick scan of the playlist... when I discovered the title of a long lost Christmas song I've been searching for, I knew I was in for a treat. TRACK RE
3 comments
Read more

Since last December, there has been a stack of Christmas CDs directly next to my computer monitor. At one point, the stack numbered around 60+ albums and stood around two foot high. I have several things that I do whenever I get a new Christmas CD. I have an Excel spreadsheet that contains all the albums, songs, and artists in my collection. I also scan the front & back covers of each of my albums for two reasons - 1.) possible trades with fellow collectors 2.) insurance purposes. Lastly, if the album is available through Amazon.com, I generally post a scan over there - sort of a backup copy of things. Click on the link and you'll see about 85% of all the CDs I own. I can happily report that after much documentation (the steps above and the reviews here at the blog), the stack stands now at merely two CDs. This is the first review of those two discs. While shopping at my local Borders store, I was perusing their bargain sections and found this CD wedged in the ot
1 comment
Read more

My Christmas collection has many sub-genres - Hawaiian Christmas music, Christmas music on organs, banjo Christmas, new age Christmas, Broadway Christmas, kiddie Christmas, country Christmas, R&B Christmas, schlocky celebrity Christmas albums, even tone-deaf Christmas music (see last review). One area that was missing was honky-tonk piano Christmas. This album fills that hole in my collection. 'Big" Tiny Little Jr. was born in Worthington, Minnesota on August 31, 1930. His father, Tiny Sr., was a big band leader who was popular throughout the Midwest. At the age of 5, Little began piano lessons. By the age of 15, he went on the road to perform. A stint in the Armed Forces didn't slow Tiny down - while stationed in Japan, he played jazz with Japanese musicians on a nightly basis. After his release from the service, Little got the break of his life - Lawrence Welk invited him to play on his television show in 1955. He became yet another star that Welk featured e
2 comments
Read more

Wendy Rose is an artist, singer, and songwriter living in Toronto, Canada. She has recorded three full length albums (including this Christmas album) available at a store "in the heart of the gay village". During the past year, she has been doing a lot of home recording on her Mac and offers samples and pix of herself at her website . As for the Christmas album, it definitely sounds like it was recorded at her home. The Casio synthesizer pounds out the drum beat and you can hear the overdubs of Wendy strumming her guitar. All the vocals, arrangements, mixing, and mastering on the album are done by her as well. For all of this, I truly admire her - not many top stars in the music business can do that themselves. But after listening to this album several times, I have to classify Wendy's singing in the same vein as Johnny "Bowtie" Barstow - the world's premier tone-deaf singer. Both Barstow's Christmas album and this one are a perfect compleme
4 comments
Read more

Once upon a time in the early 1970s, a musical genre emerged called bubblegum pop. Wikipedia defines bubblegum pop thusly: " Some of the defining characteristics of bubblegum pop include catchy melodies, simple three-chord structures, and repetitive riffs or "hooks'. It is also characterized by its lightweight lyrics, often surrounding themes of romance and courtship ." The first big bubblegum pop song was "Sugar, Sugar" by the Archies in 1969. The floodgates were open as other animated acts like Josie & The Pussycats, The Groovy Ghoulies, The Banana Splits, and Charlie Chan & The Chan Clan all began recording music. Live acts soon picked up the bubblegum torch and ran with it. The Partridge Family (featuring teen heartthrob David Cassidy), The Brady Bunch, The Osmonds, The Jackson Five, and LIttle Tony DeFranco & The DeFranco Family were cranking out music and even hitting the Billboard charts. Riding on the long bubblegum coattails w
3 comments
Read more

March 09, 2006
Here's another gem of an album rescued from the obscurity bins of the Salvation Army by the King of Jingaling at FaLaLaLaLa.com ! Not much is known about The Glad Singers... when the King posted this album on Christmas Eve last year, he stated: " It's hard to do research on an artist when the first results Google gives you are your own posts... " Fly over to the original post at FaLaLaLaLa to read the liner notes (and you can STILL DOWNLOAD this fantastic album)! As for the music, it's all top notch! It's a cross of Ray Conniff Singers meets Ferrante & Teicher meets Lawrence Welk wrapped around Christmas music. Several tracks on this album swing including "Gloria (Angels We Have Heard)", "Three Kings", and "Fum Fum Fum". However, the standout tracks are "Joy" and "Ox And Donkey". "Joy" begins as "Joy To The World" but along the way the Glad Singers just keep yell singing &quo
2 comments
Read more

Most every time I've sat down to review a new addition to my collection here at my blog, I've researched via Google and the Internet for background info on many aspects of the CD: the artist, the year it was produced, what it sounds like, and what has happened since they recorded the album in question. Here's one of the first albums I'm totally in the dark about. Rescued from obscurity by the King Of Jingaling, this was one of the featured albums at FaLaLaLaLa.com last Christmas season... and what an ALBUM! One part bossa nova, one part rock, one part Ray Conniff, one part Muzak... but it's the way it's blended that makes it so wonderful to listen to. The standout tracks are a bouncy "Silver Bells", a rockin' version of "The Little Drummer Boy", and a bouncy rockin' version of "Christmas Candy". Don't take my word for it... this album is still available to DOWNLOAD over at FaLaLaLaLa.com ! You better hitch a
1 comment
Read more
More posts