Showing posts from February, 2008
Show all

You haul Sixteen Tons, whadaya get?

What you are looking at is indeed a truly historic document in my household. When I showed this one to the Mrs. the very first time, she stopped dead in her tracks, was completely speechless, and nearly teared up. When I told my family about it, they wanted proof so here it is. This is the first paycheck I've earned and received in 8 1/2 years. When my son Alex was born back in November, 1999, I gave up my less than lucrative career in retail management and officially became a "stay-at-home dad". My wife was in the last few years of a geriatric fellowship in Michigan and looking ahead to the summer of 2000 when we would leave the metro Detroit area and back home again to Indiana. Since moving here, my wife has worked relentlessly for a retirement home as its director of health administration. She had the inevitable task of taking a facility still stuck in the 1950s and transform it into a state-of-the-art, 21st century facility complete with separate areas for a
6 comments
Read more 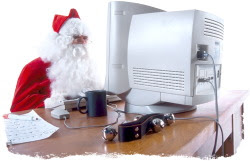 We here at the yuleblog are always excited to find new Christmas blogs. We've had a great roster of blogs to choose from in our "Links" section located in the top right hand corner of our template. We're pleased to announce several new blogs have been added: Cheerful Earful - Inkydog, a veteran of FaLaLaLaLa.com , has decided to pitch a tent and open his own blog! Inky has posted several wonderful rare Christmas albums (Hugo & Luigi, Helen O'Connell, Jan Garber) and we heartily welcome him to the neighborhood! Sanity Clause's Shanty - Sanity Clause's blog really caught my eye this year. He has some remarkable stuff like Jimmy Jenson (The Country Singing Swede) and a too-cool-for-words full-length Christmas mix for 2007. This is a comp that makes you sit up and swoon with delight at the amazing sounds assembled. Well done Sanity! Santas Working Overtime - The good people at Senses Working Overtime decided to create a Christmas only blo
8 comments
Read more

David Hasselhoff - The Night Before Christmas

February 02, 2008
This was a present from my good friend Jeff Fox of Jeffco Productions . Since 2001, Jeff and I have shared our love of Christmas music, both good and (as you can see) bad. Each year, we've tried to come up with something so utterly mindblowingly bad that it's good. Jeff loves RuPaul's Christmas album and continues to send me one song at a time through his comps. I countered several years ago with William Hung's Christmas album and then a mindblowing album from Wendy Rose . When this album was released back in 2004, it never reached the shores of America. The German people have embraced the Hoff the way French people embrace Jerry Lewis. When the Berlin Wall fell in 1989, who was on German TV singing and celebrating with an over the top jacket? This Christmas album was strictly a German import but that didn't stop Jeff. He found a copy via BitTorrent and sent me a copy (really, Jeff, you shouldn't have!). I fully concede now that musically I can&#
7 comments
Read more 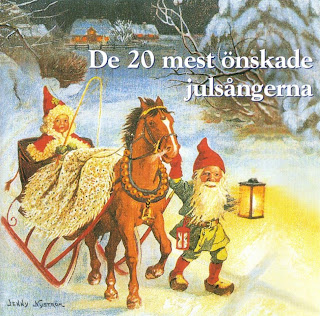 Of all the CDs I received as Christmas presents last year, the one you see here is the most special for many different reasons. My friend Scott McMeen was travelling on business through Sweden shortly before Christmas last year. While shopping at a Swedish version of Target, he discovered this CD and thought it would fit in perfectly with my Christmas music collection. Scott's family and I have been close since my first encounter with First Presbyterian Theater nearly four years ago. His wife Deb was one of my first co-stars in 2004 and took me under her wing immediately. Deb and I played two at-odds married Cub fans in the play "Bleacher Bums": Then in 2006, I decided to act again in a play and discovered Deb and I were co-stars again. I played an Italian tenor (think Pavarotti) while she played a rich dowager (think Margaret Dumont) in the play "Lend Me A Tenor": Scott and Deb's daughters (Courtney and Kelly) have babysat my children, helpe
Post a Comment
Read more
More posts