Showing posts from August, 2008
Show all

Christmas on Labor Day Weekend (for some!) 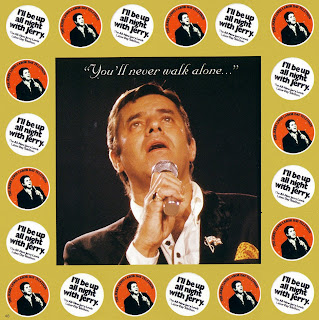 I would be remiss if I didn't mention a major event in some people's homes this weekend. The 43rd Annual Jerry Lewis MDA Telethon will broadcast for 22 hours live from Las Vegas, Nevada. Watching to see what celebrity shows up on the telethon is a huge draw and helping kids is always a plus. But let's get serious. Most tune in to see what kind of shenanigans Jerry is gonna pull next: My friend Scott Marks runs an amazing blog entitled Emulsion Compulsion - a vast home of movie reviews, rants, and quite possibly one of the most extensive image vaults on the web (yes, including Christmas images!). Scott is probably the biggest Jerry Lewis fan on the planet. He has an extensive collection of Jerry memorabilia including a rare 1976 "CBer's for Jerry" patch that was donated to him by yours truly. He has watched every Jerry movie extensively (no, not " The Day The Clown Cried ") and not only has he interviewed Jerry more than once, he once
2 comments
Read more 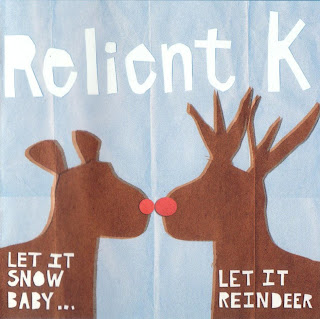 Last year I described how an unknown Christian rock Christmas CD found its way into my stocking. No one in my family owned up to its placement. Therefore, I determined that the one and only Santa Claus left it for me on Christmas Eve, 2006. It happened again last Christmas Eve. This CD you see before you was wedged into my stocking above all the little goodies Santa packed for me. My wife confessed to helping my cat Sasha and Maisey order some CDs for me (I never knew she spoke cat-o-nese) but was completely clueless as to where this came from. Santa Claus feels I need some more Christian Christmas CDs for my collection. Who am I to argue with the Big Guy? This isn't the only Relient K Christmas album in my collection. Several years ago, I purchased a used copy of " Two Lefts Don't Make A Right... But Three Do " in order to get the bonus CD entitled " Deck The Halls, Bruise Your Hand ". This was the group's first full Christmas album,
Post a Comment
Read more 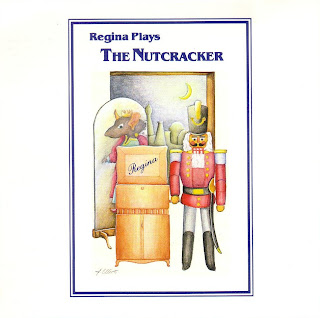 Last December, I was receiving Christmas gifts from family members, cats, and friends. Yesterday's entry was devoted to The Living Christmas Tree and my friendship with my buddy Joel. Not to be outdone last year, his wife Samantha (with whom I once shared a bed with for a play while Joel directed - only in America) snagged a FULL stack of Christmas CDs for me from a friend who didn't want them any more. Most of the CDs in the stack I already owned but this CD and its simplistic cover caught my eye. The case was old, discolored and had medium sized cracks throughout. The weight of the case felt heavier than normal which made me wonder when this CD was made. A quick look of the back cover confirmed my curiosities - the CD was produced and issued in 1989! As more and more CDs are going the way of the 8-track, the scarcity of any CD manufactured before 1998 is indeed a prize - even more so for Christmas CDs. I originally thought "this is just another music box CD a l
Post a Comment
Read more 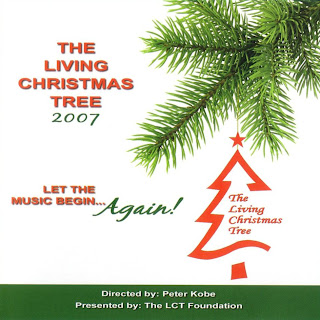 Here's a Christmas gift that wasn't given to me from any of my cats or my immediate family. This CD found its way to me from my best friend Joel - my long-lost brother that I never had or wanted (it's his joke about me, folks!) He and I have been best friends since our first encounter in Spring of 2004 at First Presbyterian Theater where he holds several jobs - production manager, full-time director, and part-time actor. When he's not working there, he's the technical director of the Scottish Rite Center here in Fort Wayne (more on that in a moment). I first wrote about him when he presented me with a copy of Jana's " American Indian Christmas ". Since then, Joel has joined me on several thrift store excursions of their record bins, searching for that second item I don't own in my collection. Shortly before Christmas last year, Joel's schedule had him shuttling between the Scottish Rite and FPT. He was working himself to death simu
Post a Comment
Read more

The Smithereens - Christmas With

August 26, 2008
In yesterday's yuleblog entry , I revealed that one of my cats purchased a Christmas CD for me last December (that's what the gift tag read). In today's entry, my other cat Sasha gets equal time. It was her paws all over this package for me under the tree (that's what the gift tag read). It's hard to believe I know... but I'm not complaining. What's also hard to believe is The Smithereens have been around for nearly 30 years! Back in 1980, four mop-topped lads from New Jersey began playing music heavily influenced by the power pop genre - especially four mop-topped lads from Liverpool. The boys kept busy in those early years; mainly sticking to the NYC bar circuit and earning some play on college radio. Despite notices from publications like Rolling Stone magazine, they still had trouble gaining an audience. They began touring and supporting traveling oldies groups like The Beau Brummels and Otis Blackwell, with whom they recorded an album'
2 comments
Read more

August 25, 2008
This Christmas CD was a present from a member of my family but I'm still trying to figure out how she ordered it. On Christmas morning, the tag read "To Rob, From Maisey". Maisey is the oldest of our two cats. Maisey probably saw my printed list of new Christmas releases from Randy's Rodeo before the holidays. Randy ranked this CD pretty high on his list and Amazon.com had an exclusive bonus track with this album. How Maisey ordered this CD I'll never know (insert your own "cat clicked on the mouse" joke here). So who is Raul Malo? Malo was born August 7, 1965 to Cuban parents in Miami, Florida. Raul started playing bass guitar in high school and soon found his way into several HS bands. In 1987, he made his first recording with a group called Basics. Their one song, "Paperheart" appeared on a promotional album entitled appropriately "Unsigned". A few years later, Malo and a high school friend, Robert Reynolds, joine
2 comments
Read more 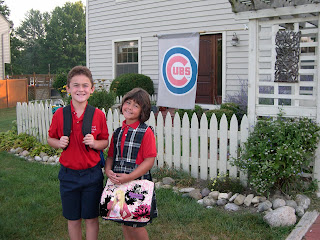 Guess whose kids went back to school today? With these two handfuls starting a new school year, my youngest child in preschool three days a week (too shy for the group photo above), and some long overdue Christmas housecleaning duties now complete (keep reading), I am once again able to devote some time, energy, and/or wit to the yuleblog. My last full entry here was back in February . Since that time, I have: Started a new job Helped my wife with her new career change Continued my stay-at-home dad duties Went on several extended family vacations while we could afford it Help my wife's family when my mother-in-law experienced a stroke (she's 90% recovered thankfully) Helped my son Alex celebrate his first Communion and all the brouhaha that goes with it Helped my two oldest kids with their basketball / cheerleading / baseball / T-ball schedules Helped build & paint several theater sets for a local theater Created sound designs for several plays at the aforem
7 comments
Read more
More posts