Showing posts from August, 2007
Show all

August 30, 2007
From an infamous Kermit Schaefer blooper: "While our game is being temporarily delayed, let us listen to our organist in the center field stands as he entertains you while diddling on his organ." Back on November 26, 2006, our friend Ernie posted this one at his blog under the title "Better Layton Than Ever". After downloading this and having the album sit on my hard drive for nearly a year, I'm finally listening to it and writing about it! And after doing some quick research on Eddie Layton, I'm ready to play ball! Layton was born in Philadelphia in 1925, studied music as a child, and was studying meteorology in college when World War II broke out. Enlisting in the U.S. Navy, Eddie was assigned to the Naval Air Station in Lindhurst, New Jersey. A chance encounter with a Hammond organ would soon change his life forever. After World War II, he fell in love with the Hammond organ and soon began studying under the tutelage of the one and only Jes
2 comments
Read more

August 29, 2007
In our last post, I explained how FaLaLaLaLa has brought thousands of Christmas music enthusiasts together to read, listen, learn, and even contribute anything Christmas to the site. I had this album in my collection (mono - badly scratched) and wasn't planning on sharing it out. However, FLLLL community member Voldar had a STEREO version and shared it on November 26, 2006 at 9:25 AM - great post V! This wasn't the first time I obtained a copy of a Billy Vaughn Christmas album. Several years ago, I traded for a Canadian CD copy called " Christmas With " that featured an exact budget number ten songs. Are they both and the same? To let the suspense build, here's some information on the artist in question. Born and raised in Kentucky, Billy Vaughn was only three years old when he taught himself the mandolin after contracting measles. As he matured into adulthood, he joined the United States National Guard in 1941 for a one-year hitch. That changed wh
5 comments
Read more

The Swingalongs - Sing A Song Of Christmas

August 22, 2007
Our next album comes to us from the wonderful online kingdom known as FaLaLaLaLa . The King of Jingaling, FLLLL's gracious, generous, and benevolent ruler featured this album. (I was awake at 1:30 AM on November 24th, 2006 when I found this online. Many times throughout the downloading season, I'll find myself staying up later, even waking in the middle of the night for 30 - 45 minutes searching for new stuff. I really need to learn how to do RSS feeds!) The King has shared many fantastic albums over the years at FLLLL. While I offer gems like Alex Houston & Elmer , he offers gold. Not fool's gold. Real gold. His albums are always a cut above the rest because of the immensely intriguing stories behind the albums themselves. Last month, The King offered the famous "NORAD Tracks Santa" LP, released at the height of the Cold War. Several years ago, it was The Rhodes Kids whose album was produced by a bonafide porn peddler. At first glance, you
1 comment
Read more 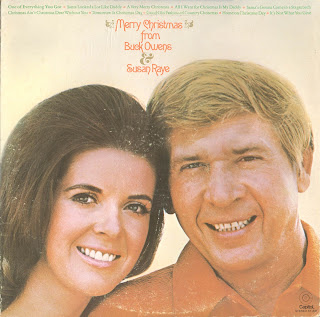 Finally, after nearly two years! Way back on December 15, 2005 , Ernie (of Ernie Not Bert) first posted this album at his blog. How I missed it the first time, I'm not sure but I spent a few days smacking myself in the head over my failure to download. Ernie reposted the album (you da man, Ern!) and I got my copy last year on November 23rd, 2006. For those who only Buck from his days on " Hee Haw ", here's the quick story: Born Alvis Edgar Owens, Jr. in 1929, he grew up on a Texas farm whose family mule was named Buck. At the age of three, he announced to the family that his name was Buck too. No one thankfully objected. While working as a truck driver in the late-1940s, Owens found himself driving through the picturesque San Joaquin Valley in California on his way to Bakersfield. The beauty of the land convinced Buck that this was the place where he wanted to settle down and did so in 1950. Meanwhile, up in the state of Oregon, a girl named Susan Raye
11 comments
Read more 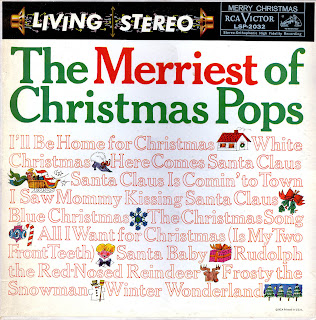 On first glance, this album has potential (any album with the RCA " Living Stereo " banner is a plus). As you look down, you'll notice the song titles, the cute Christmas graphics, but not one artist listed on the cover - a sure sign of trouble. If you're too lazy to check the back cover, you probably wouldn't have purchased the album. Thankfully, Ernie (from Ernie Not Bert ) studied this album carefully and with his keen collector's eye saw the gold within and posted it on November 23, 2006 . As Ernie explained in his original post: "The only problem is that parts of this record have been released on CD. Several years ago, they took the Esquivel solo tracks, as well as the tracks on which he backs the Skip-Jacks, mixed in some LP tracks that had a holiday theme, added a rather merry non-holiday B-side, a couple of tracks by a famous swing-revival DJ featuring a voice-over from the bed-ridden Esquivel, and called it an Esquivel Christmas album .
3 comments
Read more

August 07, 2007
It's not often you see a Christmas album adorned by imitation passport stamps (see the top right corner) or a piñata for that matter but... This intriguing album was downloaded on November 21, 2006 at 12:43 PM from our friend Bongo over at BongoBells (great find, Bongo!). Google picks up a myriad of stuff concerning Hermanos Zavala. The laughable AOL Music site claims you can find Zavala photos, songs, live performances, even music videos. Umm, yeah. Other sites found include " The One Hundred Voices of the Hermanos Zavala " and " Mariachi Los Hermanos Zavala ". The rest is just recycled hash which is a pity. This album is the Spanish equivalent of a Mitch Miller album! A soft rendition of "The Christmas Song", followed by a raucous version of "Sleigh Ride", then a very reverent "Adeste Fideles" sung beautifully in Spanish. It gets better. "Rodolfo el Reno de la Nariz Roja" takes on elements of The Thre
4 comments
Read more 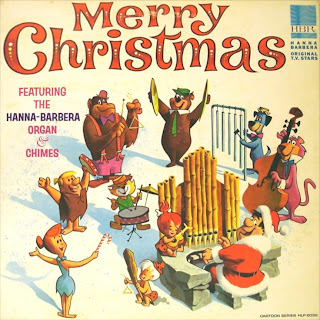 This one almost had me in its tentacles. eBay had several copies tempting me to spend $20 or more to get my own LP. Thankfully, I checked out the cool wax. Brainwerk runs the fun sharity blog entitled " Check The Cool Wax " whose great Christmas comp I reviewed here earlier this year. Last November, he posted this album and I was able to scratch this one off my list. By the looks of the cover, it promises to be a fun, fun album. Fast Freddy Flintstone on the stalagmite organ, Snagglepuss pickin' the bass, Huckleberry Hounddog on the chimes, and don't forget Magilla Gorilla on the triangle! But we're putting the cartoon horse before the cartoon cart. We have to go back to 1939 for the beginning of this story. On the backlot of Metro-Goldwyn-Mayer stood the animation studio where William Hanna and Joseph Barbera first met. They had an instant rapport and set to complete their first collaboration - a 1940 cartoon called "Puss Gets The Boot"
4 comments
Read more

The Cricketones - Christmas Is For Children

August 06, 2007
Today starts a look back at the 125+ Christmas albums (yes, 125 plus!) that I downloaded during the 2006 holiday downloading season. Some will get serious looks. Others will get thumbnail sketches. Will I get to them all? Only time will tell. This was the first full album I clicked. Even wrote down the date, the place, the time, and from who - November 18, 2006 at 9:03 AM from FaLaLaLaLa community member Inkydog . If you look closely at the bottom right hand corner of the album, you'll notice that this is from Design Records , a budget budget division of the budget label Pickwick International. Design Records are the same folks who brought you wonderful Christmas albums like " Dennis Day Sings For The Family ", " Christmas With The Happy Crickets ", and probably the greatest budget Christmas release ever: " Tijuana Christmas " by The Border Brass. Not much info is out there on the Cricketones. But the music is festive, fun, and very ligh
17 comments
Read more
More posts