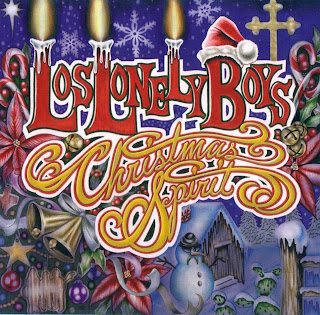 Since the beginning of 2009, I've been attempting to review Christmas CDs (and one other DVD) that I received as gifts on December 25th. The CD you see before you was a present from my son Alex who especially liked the "neat" cover artwork when ordering it from Amazon.com (with help from his mom).

Shortly before Christmas, this CD wasn't on my wish list. I didn't know a thing about the Garza brothers or their music - my musical tastes have pretty much excluded anything non-Christmas since 2004.

That changed during one of my Christmas shopping runs when I turned on a local radio station who was broadcasting Christmas music 24/7 throughout December. I tuned in during the middle of an intriguing version of "Feliz Navidad" that I hadn't heard and my interest was piqued.

I dialed 411 on my cell phone, got ahold of the radio station DJ who played the song, and asked for the artist. "Oh man, that's Los Lonely Boys, ain't it cool?" Roger wilco, good buddy!

It's appropriate that I use CB lingo because the Los Lonely Boys story starts in the 1970s. Enrique Garza and his brothers formed a conjunto band called The Falcones and played their music to whoever would listen throughout southern Texas in the 1970s and 1980s.

Around this time, Enrique and his wife raised a family in the town of San Angelo. Their three sons Henry, Jojo, and Ringo all grew up surrounded by the music of their father, his ancestors, and their ancestors' ancestors.

Even though the Garza boys grew up listening to Santana, Stevie Wonder, fellow Texan Stevie Ray Vaughan, and four guys from Liverpool, they always cited their father as their main inspiration for their music.

Like any musicians with a dream, came the day when they left Texas. They travelled to Nashville for a brief time in the mid-1990s, made some vital contacts, but the pull of family and Texas brought them back. However, they ended up at Willie Nelson's Texas studio (The Pedernales) where they recorded their first album entitled "Los Lonely Boys" in 1997.

The Garzas gave a name to their brand of music: Texican Rock N' Roll. A nice spicy mixture of rock, blues, soul, country, and Tejano, the music has something for everybody. However, music was dominated by hip-hop, boy bands, and Britney Spears at the time and their music was overlooked.

Like their father before them, they played the Texas circuit and released a follow-up album in 1998 ("Teenage Blues"). However, mainstream success eluded them for several more years. Buoyed by a strong fan base and their beloved familia, the Garzas stayed true to their sound and kept playing their music.

In 2003, a single from their album ("Real Emotions") reached #71 on the Billboard charts, catching the eyes and ears of Epic Records. They bought the rights to their first album and re-released on their label the following year

Their music was an instant hit - they released the single "Heaven" (which dominated the airwaves on its release - it even crossed over onto the COUNTRY chart), their album went to #9 on the charts, and went multi-platinum - a rarity in this day and age. For their efforts, they received a Grammy award for Best Pop Performance by a Group or Duo for "Heaven" in 2005.

The Garzas followed up their success by making an appearance on Santana's 2005 album, releasing two "live" albums, and entering the studio for their follow-up album "Sacred" with guest appearances from Willie Nelson and their father Enrique. Their single "Diamonds" was a moderate hit while the album reached #2 on the charts.

In 2008, they released two albums - "Forgiven" and the album you see before you. Recorded at the Pedernales once again, this CD has ten songs total (including two Christmas originals). It clocks in just over 30 minutes in length.

1.) I've Longed For Christmas
One of the two originals by the Garzas, this is a great mix of harmonies, bluesy guitar, and Christmas pop. Pop the clutch and let's go...

2.) She'll Be My Everything For Christmas
The other original has a definite rock/country feel throughout. Nice to hear two original songs back-to-back on a Christmas album!

3.) Run Run Rudolph
I close my eyes and I hear the Stevie Ray Vaughan influence first, Chuck Berry's great Christmas song second. Add some harmonica by the Garzas and it's a great cover from start to finish.

4.) Carol Of The Bells
We are treated to a light rock version of this song for starters but that all changes at 1:30 - the Tejano guitar and spirit infuses this song to amazing new heights. This one's gonna wind up on my annual Christmas CDs for sure some time in the near future!

5.) Rudolph The Red-Nosed Reindeer
A garage style cover of everyone's favorite reindeer with the discolored nose - the Beatle-like harmonies are a plus.

6.) Santa Claus Is Coming To Town
More like Stevie Ray is coming to town... this is flat out great.

7.) Away In A Manger
One lone electric piano and the tight harmonies of the Garzas are featured on this one - very moving.

8.) Feliz Navidad
Jose Feliciano's Christmas standard is given an overdue Texican transplant - I loved it when I heard it on the car radio, I loved it now.

9.) Jingle Bells
This one was done for fun - one of the Garzas does his best Louis Armstrong voice backed by a steady drumbeat and family. A good time was had by all - especially by this listener.

10.) Silent Night
One lead guitar and one acoustic guitar playing this one with all the feel of southern Texas at Christmas. Beautiful.


Thank goodness I turned on the car radio at that exact moment - otherwise I would have missed out on one of the best Christmas releases of 2008.

There's not one bad song on this entire album - the Garzas' Texican style doesn't get old after the 2nd, 3rd, or 484th time you listen to it. I especially enjoyed "Carol Of The Bells", "Silent Night", and I'm gonna lobby long and hard for this version of "Feliz Navidad" to replace the original!

In December of this year, my wife and I will be hosting my entire family for Christmas - the tamales, tequila, and kids will be flowing throughout my home. I suspect the sounds of Los Lonely Boys will be doing the same at that time. 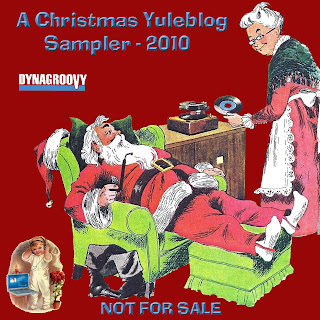