Christabel & The Jons - The Christmas Album (A TWO-FOR-ONE REVIEW) 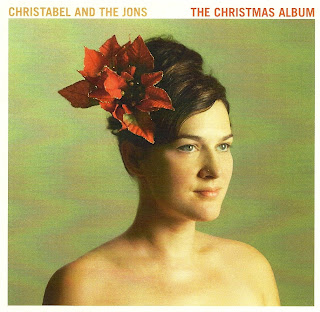 Received an interesting package at the P.O. Box a few weeks ago.  Inside was an advance copy of a Christmas album (in a clear DVD case) from a band I had never heard of before. 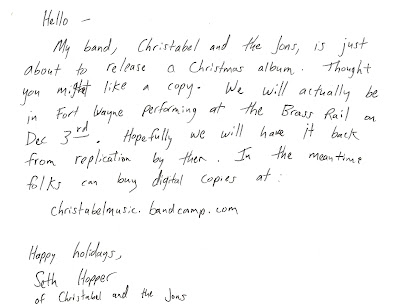 I quickly added December 3rd to my calendar as I sat down trying to figure out more about this band.  From their bio:

CB&J has been performing their distinctive style of folky swing since the spring of 2005. They released their first full-length album, “Love and Circumstances” in November of 2006. Their second and most recent album, “Custom Made For You,” was released on December 12th, 2008. In addition to headlining many shows, Christabel and the Jons has also performed at numerous festivals in the US including Bonnaroo, Riverbend, Bele Chere, Blue Plum Festival, Shakori Hills Festival, Bristol Rhythm and Roots Reunion, and Sundown in the City. They’ve also opened for many national acts including The Brazilian Girls, The Be Good Tanyas, The Red Stick Ramblers, The Wilders, and Loudon Wainwright. 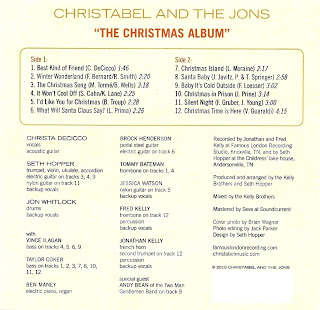 2.) Winter Wonderland
The pedal steel guitar by Brock Henderson gives this one a island feeling which goes well with the overall band sound.  Seth's trumpet solo made me laugh out loud!

I've never heard of anyone covering this old Dean Martin classic until now.  Kudos to the song selectors - this one's flat out perfect!

More kudos to whomever chose this song.  Written by Bobby Troup ("Route 66") for his wife Julie London, no one ever dared covering this song.  Another outstanding song!

Even more kudos to the person who picked this Prima pasterpiece (okay, I stretched).  If Louis Prima was from Tennessee, I'd imaging his Christmas song would sound like this.  Great, great, great!

More pedal steel guitar, Seth's great ukulele, Christa and the band's amazing vocals on this track make this one remarkable.

Another great version of a Christmas classic.  More on this one later.

The interplay between Christa and Andy Bean of the Two Man Gentleman Band adds a special Tennessee touch to this song.  Very nice.

I'm admittedly not a fan of this song but this John Prine song given the full CB & J treatment makes it one to listen for.

A very distinctive version that will make you re-listen to this one three or four times.  I enjoyed this quite a bit.


12.)  Christmas Time Is Here
What better way to go out on than with Vince Guaraldi?  Seth and the band reworks the Guaraldi sound to their advantage - I'm a fan of this band's sound.

After I had heard this album for the 19th time, I was inviting all of my friends out to The Brass Rail on December 3rd.  Not many wanted to come fearing the bar's former reputation.  But owners John Commorato Jr and Corey Rader have done a great job transforming the former dive bar into an alternative band showcase since 2007.

The show started at 10 PM with local band Buffalo Jump playing a lively, 45 minute set before CB & J took the stage.  No Christmas songs from Buffalo Jump but I definitely enjoyed the song about the Brass Rail.

Seems the band had difficulty setting up their synthesizer and electric guitar hooked up - many of the effects they showcased on the Christmas album wouldn't be available for the show.


After 45 minutes, the band started with several of their non-Christmas songs that quickly won the Fort Wayne crowd over.  Their sound was fast, impactful, and full of swing that you couldn't help tap your toes and sway to the rhythm.


First Christmas song of the night:  "Merry Christmas Baby", a song that wasn't featured on their album.  From where I was positioned in the back of the bar, I failed to capture it on my cell phone camera.


However, not wanting to make the same mistake twice, I moved up into the crowd and closer the stage:

Other Christmas songs played were "Best Kind of Friend", "Blue Christmas", and "Winter Wonderland".  The rest of their amazing two hour set (yeah, these guys wailed) was more of their patented Tennessee swing.


Around 1 AM (this stay-at-home dad's eyes were bleary), I made my way up to the band members and thanked them for an amazing show and an even more amazing Christmas album.  Seth, Christa, and Jon (who was about as tired as me when I caught him out dragging a butt) were personable and charming throughout.


This band has one of the best Christmas albums of the 2010 season.

Their other album that I bought at the show - "Custom Made For You" - has won some airtime on my boombox here at my home.  It's the first non-Christmas album to do that in December in about fourteen years.


Not digitally dead yet at the ol' yuleblog...

Oh, how happy I was to see a new post in your feed! Welcome back to the digital world. We miss you! You've got a lot of fans and friends out here.

I'm kind of jealous you got to see them. This is probably one of my favorite albums from this year as well.

I saw this over on Bongobells, but your detailed review has swayed me over into the "buy" column. Off to Bandcamp!