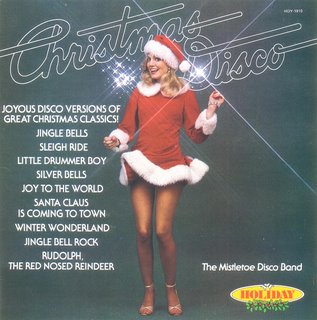 Here's an album I won on eBay many, many, many moons ago but only recently transferred it from vinyl to digital. I have a guilty pleasure about Christmas disco in general (I own about 5 different Christmas disco CDs) so when I saw that the title of the album was "Christmas Disco", I knew I had to bid and win.

Disco got its start in new clubs called discotheques in the larger cities of New York, Chicago, and Los Angeles in the early 1970s. By 1973, many disco hits could be heard on AM radio stations across the country. I distinctly remember taking a family vacation as a five year old to St. Louis in 1974 and the number one hit in America, according to Casey Kasem and the "countdown", was "Rock The Boat" by the Hues Corporation. I believe this may have been the very first #1 disco hit in America (if I'm wrong, correct me please).

By 1975, disco was taking over everything. Van McCoy's "The Hustle" was a number one smash, a girl named Donna Summer had the first of several disco hits and was dubbed "Queen of Disco", and everyone was trying to record disco hits. Even Ethel Merman (yes, Ethel Merman) recorded a full disco album. What's more scary is that Amazon.com has it for sale as a CD! Click on the links - if you dare!

Around Christmas 1976, a bright young guy by the name of Vince Montana, who was the head of the Salsoul Orchestra, decided the time was right for a Christmas disco album:

To my knowledge, this was the very first Christmas disco anything. Again if I'm wrong, please correct me. The Salsoul Orchestra would later team up with Charo (yes, the "guchi-guchi" girl herself) and release a full disco album and a special Christmas disco single "Donde Esta Santa Claus" in 1978 - the year of disco's peak in popularity.

By 1979, people were pretty much disgusted with disco - Rod Stewart's "Do Ya Think I'm Sexy?" might have been the final straw. It was for Steve Dahl, a Chicago DJ who was fired from his radio station after they switched to an all-disco format.

He quickly recorded a parody of Stewart called "Do Ya Think I'm Disco?" and held Disco Demolition Night at a White Sox doubleheader in July of that year - causing a riot on the field and untold damage to the stadium. Many people point to this event as the beginning of the end of disco..

By the time Christmas rolled around at the end of 1979, disco indeed was starting to die off. But it did produce two albums from a group called Mirror Image both released by Pickwick Records in New Jersey: 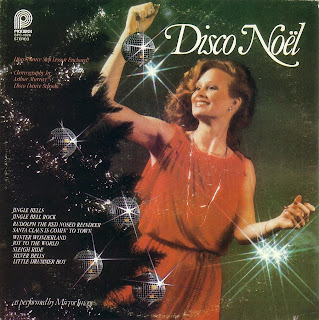 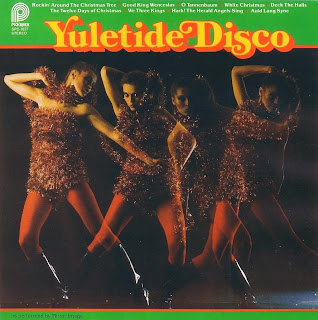 If disco was dying, this was a Christmas disco shotgun, both barrels blazin'! Not surprisingly, these two albums were combined into a 2 record set in the UK and released at Christmas 1980 entitled "Non Stop Christmas Party". This was eventually turned into a long playing CD (which I do own and I won't bore you with another Christmas disco picture).

By all accounts, disco died in 1980. For six years, it ruled not only the radio airwaves, it took hold on television ("Dance Fever" with Deney Terrio) movies ("Saturday Night Fever", "Thank God It's Friday"), and fashion (disco shirts & pants, white polyester).

This album by the Mistletoe Disco Band was released to little or no fanfare at the end of 1980. It's your standard fare of strings, synthesizers, cop whistles, and that driving disco beat. I wish I could pick out a favorite track on this album - each song brings a unique quality that must be heard to be appreciated.


Looks like Amazon and iTunes have this album available for download - therefore I've taken down my download link.  If you really want this album, click on the links to purchase far better versions of the music that I ripped and shared!


Some free advice: You don't have to wear an open front, form-fitting silk shirt with bell bottom polyester slacks, replete with platform shoes and gold chains around your neck to listen to this album... But it doesn't hurt either.

I'll be sharing other goodies in the upcoming weeks. A "Christmas In July" indeed! Until then...

Get down! Thanks Cap'n.

Did you post something at FaLaLaLaLa about this? Not sure it'll do much. There doesn't seem to be much traffic. I guess I need to work more to promote Christmas-And-A-Half.

I wouldn't worry about the traffic... it will pick up as soon as the blogs and other sites start offering their Christmas in July stuff.

Thanks for sharing this one, Cap. I have two or three other disco Christmas albums, and I'm always happy to have another. I'll listen to her right now. Keep up the great reviews!

Don't forget that there were actually two Salsoul Christmas albums. Once is never enough! (And thanks for the share, BTW)

How did I forget that one? I only reviewed back in January:

Excellent! Great work, Cap'n! I usually only listen to Disco around Christmas, but this year I'm gonna hang a Disco Ball from my living room ceiling for Christmas in July!!!

The Mistletoe Disco Band also put out "More Christmas Disco" with the same girl on the cover, but from the neck up.

I grew up with this record and my parents played it every christmas. Now I have been trying to find it on cd and have no luck. Please help !!!! I am also looking for More christmas disco on CD!!!!
E-mail me at Reboot530@verizon.net

I have this album and it is my favorite. I have been playing this one for many years.I play this album when I wrap up my presents and I really have a great time. I dance and sing and really get in the spirt. It always bring back memorise of the kids when they were little and the good times we had dancing and twirlling to these songs. I am so worried that my record is going to get broke or my record player is not going to work anymore. you no they don't make these 33's anymore so I'm so happy to hear that someone else has one too.
Happy Holiday's

Anon 1:00 - Nothing like Christmas disco to get you in the mood! Thanks for sharing that memory!

I remember the album The Mistletoe Disco Band - Christmas Disco from a long time ago. I never did have it but was glad to see it posted here. Thanks for posting it and the others also. Happy New Year to you all.

1VeryCoolGuy - You can never have enough Christmas disco in your collection I always say...

Dear Captain, when I saw the picture of the cover of the album, I was on the verge of tears, sudedenly I was thirteen and receiving this record from my grandmother, such great memories. Good dam blog, master. Holiday Greetings from Mexico. Merry Christmas!!

Thanks for the memories! I have the sequel LP, "More Christmas Disco." Back then, radio and TV stations could still use regular "label" records as background music for commercials. Now they apparently have to use sound-alike (?) production music (can anyone tell me when the rules changed?) Anyway, one local station was using disco Xmas music on some commercials and I liked what I heard. Bought the Salsoul LP and that wasn't it, so bought this bargain-bin disc on a hunch and "bingo!" Many years later I found some of the same tracks on a promotional LP titled "Seasons Greetings from 3M." Apparently 3M was then competing with Muzak and Seeburg with an office-music system called Cantata. So these tracks MAY have originally been produced for this system, they're credited on the LP to "Odyssey Productions," whoever that was...