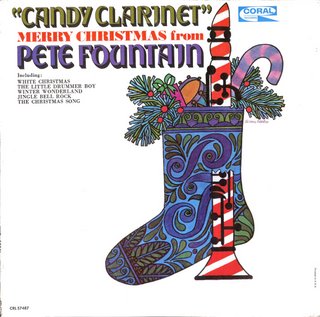 Here is the next review... Not only is this yet another album I downloaded from Ernie at his blog last year, but I have I been obsessively listening to this album for the past week.

I'm hoping that this spasm of typing will get this album out of my system. I fear it won't. It will be like any other addiction - you go cold turkey, it gnaws at you, you crave the fix, and eventually you give in.

Up front: This was one of my favorite albums downloaded last year.

Now you may be asking to yourself "Who is Pete Fountain?". Others might be asking "Okay, is this a hypothetical question or just a segue into today's history lesson?"

In any case, Pete Fountain is one of the premier clarinetists of this or any era. Born in 1930 in New Orleans, Fountain was surrounded by Dixieland from the cradle to his formative years. This was the era of Benny Goodman and Irving Fazola, a New Orleans clarinetist who greatly influenced the young Pete. Fountain quickly developed his own "fat" sound from the clarinet and by age 16, he was playing with several jazz bands up and down Bourbon Street.

As the 1950s began, he was performing with the best known Dixieland bands of the era: The Dukes of Dixieland, The Basin Street Six, and a young trumpeter starting to make a name for himself named Al Hirt. Around this time, Pete met a young gal by the name of Beverly Lang - his future wife of 54 years and counting.

Then came rock-n-roll. The Dixieland music market quickly dried up and Fountain needed a place to play his clarinet. Where to go and who to see? That's as simple as counting... And ah-one and ah-two! Pete became the in-house clarinetist for Lawrence Welk and company - good timing too. It was between these years (1957 - 1959) that Welk's TV show was the most popular according to the Nielsens.

However, Fountain longed to be home near Beverly and his beloved New Orleans. So he left Welk and returned to his hometown, opened his own place (Pete Fountain's Jazz Club) where he still occasionally plays, went on to record over 100 albums, and toured all over the world bringing Dixieland into the far reaching corners of the Earth.

"Candy Clarinet" was recorded and released in 1967 and still sounds incredibly vital and fresh today. The first licks off the clarinet stick will hook you and not let go. If you can, listen past the clarinet and you'll hear some fantastic jazz as well. Standout tracks include the title track "Candy Clarinet", "Winter Wonderland" is just plain haunting, "The Little Drummer Boy" - great bass playing, and "Christmas Is A-Comin" ends the album with a fantastic jam from all involved.

It's a great, great album.

Almost a year ago, Hurricane Katrina paid a visit to New Orleans and its massive destruction misplaced many people - including Pete and Beverly Fountain's home. They still reside in New Orleans and have committed themselves to helping rebuild the city and state they've known all their lives. At 75, Pete can still blow a mean clarinet.

Thanks Pete for a great Christmas album, all that you've done with your "Candy Clarinet", and all that you're doing in the Big Easy.

(I wanted to post just the photo, but comments won't let me include images...)

OUTSTANDING picture Jeff! Thanks for sharing!

Cut and paste the link for a treat folks!

I was going to mention that Pete had survived the hurricane named Katrina, but you beat me to it. Thanks for the info, Cap'n.

I wasn't sure if this record existed in stereo or not, but there's one on eBay right now with STEREO right there on the cover. Now I'll have to search for one of those.

Wow, this is annoying..

While I was growing up in London, Ontario, this album was THE Christmas record that made it really feel like Christmas, but in the last few years, Christmas at my parents' house has never felt quite right because they no longer have a working turntable. DVD's and all..

So THIS year over the Christmas holiday, I'm at the folks' place once again missing the sounds of Pete Fountain's clarinet, so I decide to borrow my dad's copy and bring it all the way to Toronto where I could have it ripped transferred to cd for the nominal fee of $20.00. I'd have done it myself, but I don't have a turntable either.

So $20.00 later I now have a nice cd copy of this classic Christmas album of all time.

Then today I'm looking up info on the album to see if I can find a release date, and I stumble upon this blog to discover that I could have saved myself that $20.00 and just downloaded a STEREO version for free, and had it before Christmas.

So I figure as long as I'm here I may as well download it anyway, since maybe this fancy stereo version will sound even better than my dad's mono one, but the file's been removed

Well anyway, I've learned my lesson. Should have checked the internets in the first place. And who knows, maybe it will be back up next year...?

Right then! It's February 4th now, but in the spirit of your blog, Merry Christmas!

You have my everlasting thanks as well.

I grew up with this album, and most of Pete's others. My folks were big fans and even took a trip to New Orleans to see him live.

And people wonder why I played clarinet as a kid and later played professionally. LOL

I've been looking for this for years!

MCA actually re-titled and re-released this on cassete in 1989 as "Christmas is a comin'" but it's missing some cuts (like Candy Clarinet).