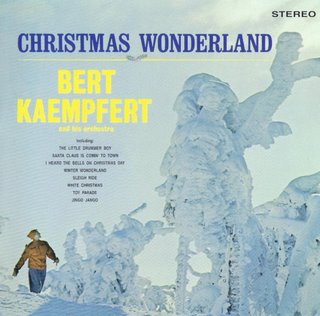 Since the beginning of November, I've probably purchased around ten new Christmas CDs and received several others from interested parties at my PO Box.

Most of these CDs won't be reviewed until 2007 - between my contributions over at FaLaLaLaLa.com, my schedule of releases here at the yuleblog, and my family's accelerating appointment schedule during December and the holidays, I won't have the time necessary to devote to my reviews / history lessons!

So this is it - THE final addition to my Christmas music collection in this calendar year here at the yuleblog.

Are you ready for an interesting story?

In the spring of this year, I discovered a thrift store in the dodgy end of my hometown of Fort Wayne. On their second floor next to the slightly used typewriters and other electronics was a 10 foot long by 5 foot high rack of albums!

I thought I had died and went to heaven. It took me four different visits over a two week period to go through every single album and discovered the precious black gold vinyl that exist in the stacks. On one of the first visits, I found this gem: 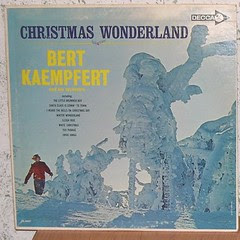 I was pretty stoked; a fair percentage of the Christmas albums I found were of the budget album / Firestone Presents variety. There were a few big name albums that I just left out in plain view so others could buy them... just checking to see if you were paying attention!

The mono cover was in good shape and the record had a few scratches but no gouges - I wasn't complaining for 25 cents. It was one of the catches of the day.

On the very last visit, I found this: 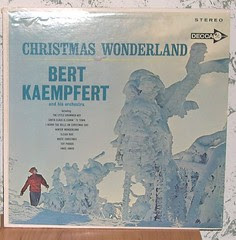 GREAT JUMPIN' ICEBERGS! First the mono, then the stereo copy! The covers and album were in extremely good condition as well. It was the perfect way to close out my visits to that store. As I drove home, I was still shaking my head in disbelief over my good fortune.

Then it hit me - someone's playing with me. Why would there be two ripe copies of this album found back to back in such short time? When I got home, the Internet confirmed it.

It was readily available for sale online. I stuffed these copies of the album in a pile marked "CD Available" and ordered the CD used as a birthday gift for myself in June.

Almost one month passed before I noticed that the order wasn't filled. A quick e-mail to the vendor selling the used copy told me it was "processing" the order. I bid my time. I waited. Another month passed.

At the beginning of August, I received another e-mail from the vendor stating "the order couldn't be filled" and I could cash it out and order another CD. By now, most people would cash in their chips and move on. Not me.

I knew that most Christmas CDs weren't available to stores and vendors until the record companies began releasing Christmas music around the beginning of October. Again I bid my time.

My patience paid off. In the middle of October, a shipping confirmation e-mail came my way. All this for Bert Kaempfert? You bet!

Kaempfert was a talented musician whose compositions include "Danke Schoen" (made famous by Wayne Newton), "Spanish Eyes" (a #1 hit for Al Martino), and "Strangers In The Night" (scooby dooby doo Frankie!). His many instrumental albums sold throughout from the 50s to the 70s and ranked right up there with Ray Conniff and Percy Faith.

Unlike many musicians of his era, Bert actually worked with members of the rock and roll set. He contributed several songs to the soundtrack of "G.I. Blues" for Elvis Presley no less and gave four guys from Liverpool a major push in their bid to become successful (even though he dubbed the Beatles "The Beat Brothers").

This album is pretty fresh, even by today's standards. The first track is "The Little Drummer Boy", a slightly uptempo version that is extremely pleasing on the ears. Perhaps this is why this was released as the only single from the album back in its original release year of 1963.

The rest of the album is very well suited for the finger snapping set - each tune is upbeat, bright, cheerful. The standards are covered ("Santa Claus Is Coming To Town", "Winter Wonderland", "Sleigh Ride", "White Christmas") but the songs you should skip to are the Kaempfert originals. These are the tracks that make the album.

It's not surprising to discover that several of these original tracks were released as B-sides for two Christmas singles ("Jingo Jango" and "Holiday For Bells". The title track "Christmas Wonderland" was even released as an A-side two years later in 1965! Each original track has a vibrancy not easily found in Christmas music. Kaempfert does so with ease and it's a treat to listen to.

This album also holds a dear spot in my childhood memories of Christmas. One of the first visits to my grandmother's Chicago apartment was at Christmas time. As I watched out her picture window at the falling snowflakes dusting the cars and buses that sped by on Montrose Avenue, this album played softly in the background amid burning brownies on the mantel and freshly baked scented candles in the oven.

Just checking to see if you we're paying attention again. Reverse that.

I was the PD (get it, PDMan) of an Easy Listening radio station in another life, and this LP was a staple for us during the holiday season. Another fantastic LP!

PDman - I wish there were more PDs like you who would play forgotten gems like this on the radio at Christmas time.

There's only so much of The Singing Dogs that I can take.

The stereo version of this LP has been played at every family Christmas of mine for the past 41 years. After my parents purchased their first Magnavox console stereo back in 1965, this was the first stereo Christmas album they bought for it. Like you I have had to replace the original LP over the years at used record shops, and then finally bought the CD 6 years ago. It is still used today for radio and TV spots and I was blown away last year to hear it played in an episode of Desperate Housewives??? Long live Bert!

Anon - I have a modicum of respect for "Desperate Housewives" again! Thanks for the comment!

Christmas 2011 and I'm playing Christmas Wonderland, my favorite Christmas album, another old thrift shop find (along with probably a dozen thrift shop Kaempfert brethren).
What a great evergreen- pun intended!
Only downside: wish it were a double album.
Passing the tradition along to my two daughters, hopefully they will be listening to this in 40 years.
I discovered Kaempfert in my teens, in the 60's as background music on TV, took me a long while to figure out who it was, and 15 years to start buying used Lp's.