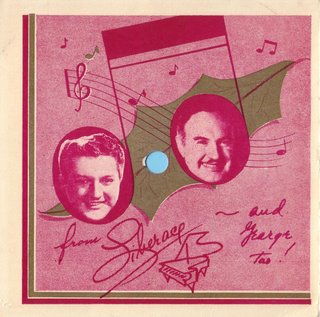 Yesterday, two Christmas flexis were offered by members of FaLaLaLaLa in their Forums section.

FLLLL member Shemp gave us the first paper record at 78 RPM. "General Motors Songs of Christmas" is a two tracked flexi that features the "General Motors Chorus" singing Christmas favorites. Do you think GM pulled some of these singers off the line to record this?

This prompted FLLLL member PDMan to comment that he had a Lawrence Welk Christmas flexi.

After some urging (and ah-share, and ah-share), he was gracious enough to post "Christmas Music For Your Holiday Pleasure", compliments of your local Dodge dealer. 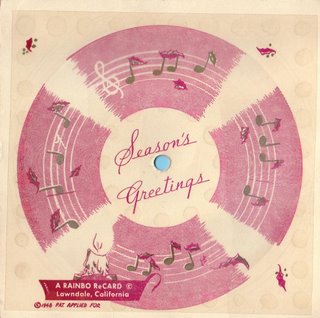 Back in 1958, if you test drove a new Dodge, you were handed this flexi with Welk introducing the "luvely" Lennon Sisters singing "Merry Christmas From Our House To Your House."

All of this communal sharing touched me deeply (although some think I'm touched in the head already). So I dug deep into my stacks of 33s and 45s and found the one and only flexi in my entire record collection.

In the early 1950s while at the height of his popularity, Liberace recorded several of these Christmas flexis in different years and sent them to fan club members in good standing.

This flexi was one of the very first items I won on eBay many moons ago (paid around $20). Since then, I've only seen one other Liberace Christmas flexi on eBay - a 1952 version that sold for nearly $70 back in 2004.

The recording is short - it clocks in around 1:13. You'll hear Liberace personally thank you for buying his records, attending his concerts, and coercing his brother George to actually speak (a very rare occurrence). You'll either get the warm fuzzies or feel mild nausea; two feelings closely associated with Christmas.

Test out your emotional response here:


And if you can't get enough Liberace Christmas (and really, who can't?), here is an excerpt from his infamous 1954 Christmas Special:

I hadn't heard this one! Thanks! (I think I fall into the warm nausea column...)

heheh... it's nice to know george actually existed instead of being a figment of liberace's imagination... thx!

Somewhere I have an actual LP by George. Just him, no big brother. It's not Christmas, unfortunately. And then of course there's a picture of George as Santa on the cover of one of Liberace's Christmas albums. So I'm pretty sure he's not imaginary... :)

PDMan - Thanks again for posting the Welk flexi and go lie down until it passes!

Johnny Dollar - I have an old VHS of Liberace's "Christmas Show" where George plays violin, conducts the orchestra, and even appears and talks as Santa Claus! This is where they got the cover shot for the album Ernie referred to!

Ernie - My mom owned Liberace's Hollywood Bowl concert album, played it over and over and over, and I know that Liberace mentioned George had an album entitled "Musical something something with George Liberace". Am I a delusional victim of musical child abuse or am I in the ballpark with this one?

The all-time best skewering of Liberace and George was the Spike Jones/Billy Barty send-up of "i'm In The Mood For Love." This one was dead on...right down to the violin "artistry".

Around the two minute mark, Billy Barty makes his baby grand appearance as Little Liberace. You wanna laugh? This is it!