A Bongo Trio - Three Reviews in One

Why didn't someone think of this before?

One song, one CD, many different versions?
And with Christmas songs? BONUS!

Someone did it, though. Not once, not twice, but THREE times! 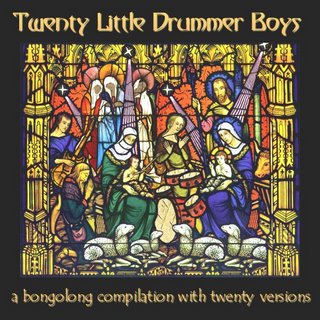 This is the first of THREE CDs compiled by our friend Bongo over at his BongoBells blog. These three CDs were the very first albums I downloaded from his site and you probably can STILL download these albums if you hurry!
Twenty Little Drummer Boys - TRACK REVIEW:
1.) The Harry Simone Chorale
I use to detest this song when I was a child because I thought it was repetitive and the Rankin-Bass Christmas special sucked. I have since wised up.
2.) Cuba L.A.
Imagine sitting in a Cuban jazz bar in L.A. around Christmas. This is smooooth!
3.) Peter Wood Singers
Bongo snagged this from FaLaLaLaLa.com and you can read my yuleblog review here.
4.) RiverTribe
An electronica version? Somehow, it fits with this song nicely!
5.) Ten Point Ten
An interesting version... a Michael Bolton sound alike? And this lasts 6:46? Check please!
6.) Eric Darken
Very nice voice although the song rambles here and there. Very 1980s feel to this one!
7.) Sy Mann (from "Switched On Santa")
Four out of five physicians recommend a daily dose of MOOG. You can download this album at my buddy Jeff's website!
8.) Smokey Mountain
Played on authentic 19th century instruments, this one lasts only 1:37. A nice version all around.
9.) Arthur Lyman
A great version from the Hawaiian Island king of vibes!
10.) Take 6
Whatever happened to these guys? One of the highlights off their 1991 Christmas CD.
11.) Terry Beaumont
Xylophone? Vibes? A bouncy island beat you can dance to? Sweet!
12.) Mannheim Steamroller
Must .... reach .... the .... skip .... button .... before .... passing ....... zzzzz
13.) Jingle Cats
Cleverly uses a cat's purr to catch the feel of the "rum-pa-pum-pumms". Not as annoying as you would think!
14.) Daryl Stuermer
A soft jazz version for the first 2 minutes, then a screechy electric guitar for the next two. Whoa.
15.) The Fab Four
This Beatle soundalike group blends "Little Drummer Boy" around "Sun King" - it works fantastically!
16.) Yellowjackets
A pure jazz version of this song by a group who knows its business!
17.) Kofi
A hip-hop / reggae version of this song by a poor man's Shaggy. I can't stop laughing!
18.) White Heart
METAL! Banging my head while holding the lighter (not cell phone) over my head!
19.) Ray Stevens
Don't look Ethel... but Ray's done a pretty funny parody called "The Little Drummer Boy-Next Door"
20.) Bongolong
Our friend Bongo plays the final version a la surf guitar style! Dude! A narly way to end the CD! 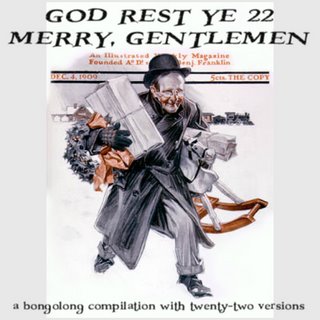 This is the second of THREE CDs compiled by our friend Bongo over at his BongoBells blog. These three CDs were the very first albums I downloaded from his site and you probably can STILL download these albums if you hurry!

1.) Chick Corea
If you're a jazz fan, than look no further than this! If not, you're probably going to be confused.

2.) The Gypsy Hombres
Think of gypsy music by way of Django Reinhart. Their whole Christmas CD is like this... Great stuff!

4.) Viva Voce
A metal version taken from "Happy Christmas V2". Play this one at your next Christmas Headbanger's Ball!

5.) Jimmy Smith
SWEEEEETTT! One of the better versions of this song out there! I reviewed Smith's Christmas album back in January...

6.) Kenny Burrell
They finally released his Christmas album on CD? How did I miss that one? Adding this to my list...

8.) The London Philharmonic Orchestra
This is definitely orchestral! And then some! Wow... Even sounds a little like an opera!

9.) The Fab Four
Mix "God Rest Ye Merry Gentlemen" with the Beatles' "Within You, Without You"... not of one their better ones.

10.) Mannheim Steamroller
TWO SONGS IN ONE DAY??? Two more than prescribed by law! God, this is awful...

11.) Dixieland Christmas
Need I say more? This one swings!

12.) Christmas On The Border
A Santana soundalike group doing their version... Interesting, yes.

14.) The Swingle Singers
Long before Rockapella were the Swingles... The only bad thing about this song that it's 1:05! Fantastic, as always!

15.) Ramsey Lewis Trio
I never knew Ramsey recorded this one! Excellent, excellent! How many Christmas jazz albums do you own Bongo?

16.) Cuba L.A.
Another great tune from these guys... Taken from this Christmas CD I must add to my list...

17.) The Yuletide Lounge Band
This is very, VERY good. Nice vocal quality too! From a inexpensive, very underrated Christmas CD!

18.) Tairona
Crickets to begin with... then add panflute and a third world music band. Not a strong one.

19.) The Border Patrol
A Mexican flavored version. Sounds good the first time around, gets old upon repeat hearings.

20.) Stan Kenton
Not as jazzy as Stan could have gone but it's better than most of the jazz versions out there.

21.) Jethro Tull
Given the FULL Jethro Tull treatment complete with trilling flute. Around the 2 minute mark I zoned out...

22.) Bongolong
Bongo rocks the house with this classic rock version! There is no end to your talent my friend! 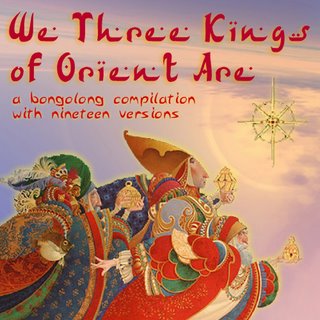 This is the third of THREE CDs compiled by our friend Bongo over at his BongoBells blog. These three CDs were the very first albums I downloaded from his site and you probably can STILL download these albums if you hurry!

We Three Kings of Orient Are - TRACK REVIEWS:

1.) Ten Point Ten
This 6:40 version is about 5 minutes too long... Bonus points if you can sit through the whole thing!

3.) London Symphony Brass Ensemble
Very brassy and not dull to listen to. A good version of this song!

4.) Keith Emerson
A synthesizer virtuoso performance. Too close for Mannheim Steamroller for me...

5.) The Three Bings
What if the Doors backed Bing Crosby? Cleverly mixes "Three Kings" and "People Are Strange".

6.) Tairona
The panflute is back... Thanks to the strong drumming, I'd take this one over the last.

7.) Following Yonder Star
Strange one, this is. Not sure if its jazz, soul, or a fusion of both. Very different.

8.) Mannheim Steamroller
This one at times reminds me of "Switched On Santa". The typical Steamroller elements take over and sink the ship.

9.) Rhythms Of The World
This one sounds colonial... It goes nowhere pretty quick.

10.) Dingers
Reggae influenced alternative rock? Wow! What a change of pace! My favorite of the THREE discs so far!

11.) Cuba L.A.
Very nice slower tempo song from these guys... Hope they put out a full Christmas album at some point!

13.) Eric Darken
Jethro Tull should take some notes from this guy on the flute. Not a bad jazz version at all.

14.) RiverTribe
This electronica version has digeridoo and sitar elements intergrated into it... Refreshing!

15.) Turning Point
A jazz version with no life that rambles on and on just like this sentence.... zzzzz.

16.) Stan Kenton
Starts off small and soft, builds to a big, bold, jazzy climax, and goes down smooth. Bravo!

17.) Richard Sussman
This guy's having too much fun playing the acoustic guitar... Wish I could say the same about listening to it.

18.) Jethro Tull
Why don't they sing anymore? It might have helped... More cowbell would have been good.

19.) Bongolong
A Chinese influenced version of this song? Bongo, this is fantastic stuff! Nicely done!


Bongo, thanks for compiling all of these. I hope you'll continue to gather different versions of songs and issue them onto CD.

thanks a lot for all this... love your blog captain...

Thanks for stopping by Sean! It's going to be a LOT of fun in a matter of months!