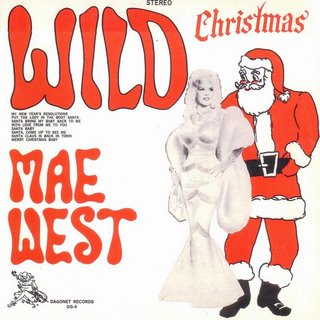 Everyone remembers their first time.

My first time was with Mae West.

It's not as shocking as you think, dirty minded people.

Last year, this was the very first full Christmas album I recorded, transferred, and offered as sharity anywhere.
This is what my description of the album read as posted at FaLaLaLaLa:

In 1966, Mae West was on a roll! Her earlier album release that year was "Way Out West", a minor hit on college campuses that featured songs like "When A Man Loves A Woman", "Shakin' All Over", and two Beatle covers (everyone was covering the Beatles in '66).

Quick to act before the momentum ran out, Mae went into the recording studio again to record this album. They probably rushed the recordings in order to get it out on time for Christmas (maybe why there's only eight songs on the album) but she gives each tune the FULL Mae West treatment.

This features 7 Christmas songs and the obligatory Beatle cover (With Love From Me To You).

In later years, this album was re-released under the title "Mae In December" (does anyone know what label it was released on?) and you can find copies of both occasionally on eBay and at MusicStack.

This copy was found in VG to EX condition via eBay and was transferred / restored / encoded using SonicFoundry Sound Forge 4.0.


When I offered this last year (and the Ken Griffin record I referred to in today's earlier yuleblog entry), I actually enjoyed scouring websites via Google and trying to find out info on Christmas releases. It was these two records that planted the seed that inspired me to start up the yuleblog.


UPDATE:  This album is now available for purchase elsewhere as a 2-for-1 Canadian import CD.  Along with West's holiday offering comes "The Fabulous Mae West", a 1970 album that features Mae singing 11 tunes in her own unique way.
Sadly, this means this album is no longer available to download here.