On Monday and Tuesday, I reviewed CDs in which I originally found the LP album first, then the CDs. I also mentioned in one of the yuleblog entries:

"I still could have gone ahead with my plans and shared this album out. But if it's available elsewhere on CD, I won't. It's not fair to the artists involved and my conscious remains clear. End of story."

With that in mind, I now present some albums in my collection that I was all set to transfer, clean up, and present as gifts for the 2006 downloading season but won't: 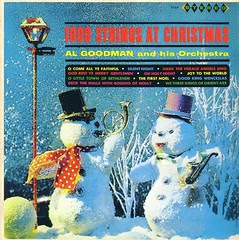 
This one comes to us from the good folks at Premier Albums (356 W 40th St, NY, NY). Premier also bought us the fabulous Woody The Woodchuck album that's been bandied about through cyberspace.

As you can see, the cover is festive, gay, and bright - in excellent shape. The record is a totally different story. A football team must have used this album to clean their cleats. The scratches were deep (some were canyonesque) and after spending two days to record one 45 second segment of track number one, I threw in the towel.

If anyone has a clean copy, let us know! 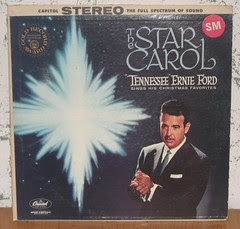 
You've probably seen this one at your local Goodwill store many times over. This was released on CD back in 1990 and isn't available anymore, anywhere. So technically, it's a borderline call.

However, Bongo at BongoBells released this at his blog a few weeks ago. That solves that. 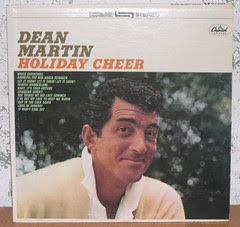 
It seems like every year, there's a new Christmas album from Drunky. This year's entry is "Christmas With Dino".

This 1965 album was definitely a repackage job from Capitol - only six Christmas songs (all found on the CD linked above) rounded out by five non holiday songs. Not a real festive cover either (no offense Dean). 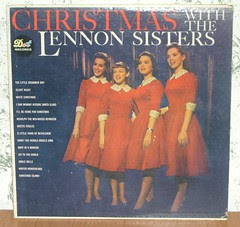 The Lennon Sisters - Christmas With


I nearly cried when I found this one - I thought for sure this was a lock to share. Bought at a Goodwill store for 28 cents (gotta love those 50% off days!), the album is in fair condition (the back cover would have needed a long time in the photo shop).

One click of the mouse pointed me to the official store of the Lennon Sisters where you can purchase this very album on CD. Adding this one to my wish list! 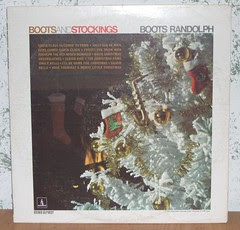 
This came to me from one of my wife's relatives. She knew I was a Christmas album nut and she had a large stack of albums in her cellar she wanted gone. This one's in near mint condition also.

CDs were available for a time on Amazon.com but it seems they all vanished. Hmmmm... what to do, what to do... 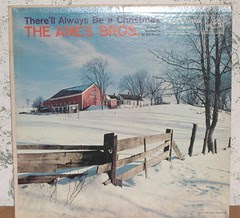 The Ames Brothers - There'll Always Be A Christmas


There's a boatload of Ames Brothers Christmas music available everywhere. So when I found this sandwiched between Dean Martin and a German Christmas album (more on that later), I assumed this one was a few mouse clicks away.

Turns out I was right. And they even have the "Living Stereo" cover as well! 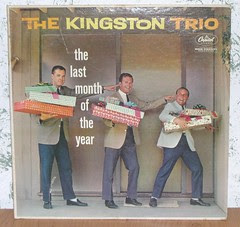 The Kingston Trio - The Last Month Of The Year


Seems I owe an older brother an apology for all the times I slugged him at Christmas when he gave me a wet willie. This album cover proves his theory that wet willies in the ear was (is) a holiday tradition.

I knew this one was available for purchase online the minute I saw it. 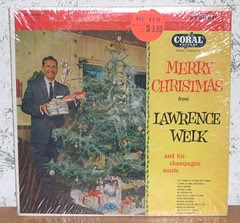 
If I had a nickel every time this one was played in my childhood home during Christmas... my mother kept real good care of her records - the shrink wrap on this is the original. So is the S.S. Kresge sale sticker of $3.89!

If I had a nickel for every Lawrence Welk CD I've seen in the past several years... Anyone have an exact count of Christmas CDs Welk has released? Chances are you can find all of these songs on other compilations.


Another one of my mother's albums. She didn't play this one too much but I wish she did. The constant exposure to Welk and company had a weird effect on my tastes in music - go figure!

Watch out for this one on eBay... prices tend to go a little high. Your best bet is to get a good used copy from Amazon. 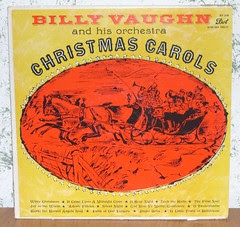 
I think this was offered at one time by someone over at FaLaLaLaLa. When I picked this up for 25 cents, it struck me as awfully familiar. My friend Jeff sent me a copy of this Canadian import so I thought this one was readily available.

But I can't seem to find a CD for purchase anywhere. Hmmm...


THIS JUST IN: a copy of "White Christmas" by the Mike Sammes Singers in near mint condition! Revisited my local Salvation Army and found it sitting in a vintage 1960s wire display rack. Total cost: $1.06.

This I already had thanks to the King Of Jingaling over at FaLaLaLaLa. It was one of his featured albums a year or two ago (and it's his all-time favorite Christmas album!).


So that's all the albums in my "CD Available" pile. Will I transfer these over one day? Maybe.

But I won't be offering them if they're just a mouse click away...

"Christmas with Eddy Arnold" has been reissued this year on CD - I've seen it online at a few places.

The Lawrence Welk LP - as I remember there are two tracks not on CD somewhere. One of them is a favorite of mine, "Christmas in Santa Fe," featuring the Lennon Sisters.

I've seen used copies of the "Boots and Stockings" CD on EBay. He has also done two newer Christmas CDs. Check out his website at www.bootsrandolph.com for info.

PD - thanks for all the info! Knowing that the Eddy Arnold CD is back in print, I know what I'm getting my father-in-law for Christmas!

I love that Santa From Santa Fe track! I put it on one of my collections. Digging deep into the Lawrence Welk back catalog can be very rewarding. My fave this year is I Wanna Do More Than Whistle. Great stuff.

I'll check on my copy of that Al Goodman LP for you. I know I have a nice jacket, but I don't remember what the vinyl looks like. Sometimes I get so excited when I find stuff that I don't even pull out the record. Then I usually get home and find that the sleeve contains a Firestone Christmas record or something... :(

Ernie - "Outer Space Santa" is my favorite Welk track because of the rock-n-roll, Esquivel-like arrangement!

Regarding finding stuff and not checking the record, my experience was finding just the sleeve of John Klein's "Christmas Sound Spectacular" in LIVING STEREO. Talk about disappointment!

Well, it took me half an hour, but I found the Al Goodman LP. (How do you arrange your records? I can't find anything...) It plays OK, lots of surface noise, then ten seconds in the left track drops out for ten seconds. I assume it's a pressing defect. And to tell you the truth, I'm not sure you're missing much here. It's called 1000 Strings for a reason. I also found a second LP by Al called Christmas Sing-A-Long. I'm almost afraid to listen to it...

Outer Space Santa? Where is that, I need to hear it. Have I missed it somehow on all these LPs?

I think Outer Space Santa was on an EP. Seems like it was billed as Lawrence Welk's Little Band.

Ernie - Alphabetically of course! And with a label like Premier, it wouldn't surprise me in the least that there would be a glitch in the recordings!

PD - You are on your game! "Outer Space Santa" by Lawrence Welk's Little Band and it was released in 1958 - the very height of space age pop! See for yourself:

Hi there, I am converting some vinyl to CD and came across your post of BootsandStockings. Do you have an mp3 version of this already converted? I also noticed that you have the Bert Kaempfert Christmas Wonderland album (both stereo and mono). I have the mono version with the same cover as you have posted. But I also have a Stereo version of this album with an entirely different cover. This particular cover is a hand drawn image of a house with santa and his reindeer flying over the house. Not sure if you knew about this.

I'd love to keep in touch. My dad passed away on boxing day of last year and he left me his collection of 1200 records. Mostly James Last, Bert Kaempfert, Montovani and Boston Pops and stuff from that genre and era. I am slowly digging my way out of the pile and decided to get some of the Christmas stuff out before it's too late!