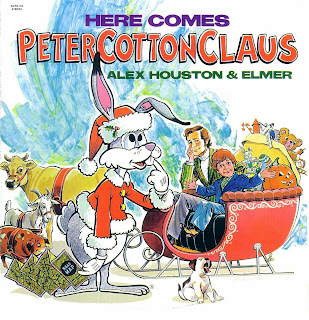 Last December, I was making the rounds online and came across Lee Hartfield's incredible blog Music You (Possibly) Won't Hear Anyplace. His entry of December 3rd of last year had a picture of the album cover that stayed with me for a long time (thanks Lee!).

That image came in handy when I found a copy of this album among a stack of kiddie records at a antique store in Valparaiso, Indiana. I'm not sure which purchase made me giddier; this album or the copy of "Sesame Street Disco"?

From the age of five, Alex Houston wanted to be a ventriloquist. He found his future partner in High Point, North Carolina and bought his dummy Elmer from a local sheriff for $50. Their career spanned 50 years!

They got their first break in 1954 on Jimmy Dean's first TV show, stayed there for five years, moved to Nashville and worked as an opening act to country stars like Loretta Lynn, Conway Twitty, Dolly Parton, and a newcomer named Charley Pride.

Pride and Houston worked together for three and a half years. It was during this partnership that this album was recorded and Charley graciously wrote the liner notes for the back cover.

This album was recorded in 1972 on Willex Records and they really, REALLY tried to push the title track of this album down your throat: the first track on each side of the album is "Here Comes Peter Cotton Claus"!

As for the rest of the album, it sounds like Houston had Elmer at his side, doing both voices all in one take. I think it would have sounded better (if such a thing is possible) if he recorded them separately - the ventriloquist's tight-lippedness voice of the dummy would have been less present.

This album (and the dummy) should have stayed in the box:

wait...hold up...you didn't by Sesame Street Fever?! is it still there? i had it on EIGHT TRACK!

Thanks for your comment on my site! As far as the 'Christmas at Bok Tower' album goes, I found out that it has been released on CD and is sold in the gift shop at the Bok Tower Sanctuary, so I am uncomfortable sharing it again this year. Thanks for letting me know about the request!

Cawfee - I did purchase the "Sesame Street Disco" album - quite the mindblower!

Pastor - Thanks for the update on that album!

for fans of alex houston i suggest a book called "trance-formation of america" by cathy o'brien and mark phillips. a warning though,you might look at alex houston a whole lot diffrent after reading this book

Anon - You mean to tell me they used this album as government mind control?

Alex Houston is named as an abuser of Cathy O Brien in her book 'The Trance Formation of America' - read it if you have the guts to.

The Cathy O'Brien thing is garden variety New World Order conspiracy theory lunacy. She claims to have been mind-controlled and sexually abused by a secret branch of the CIA, and of course, EVERYBODY is in on it (including, no doubt, me, since I've posted this).

NO...Seriously. as a survivor of incest, out of control pphysical violence ,and constant verbal abuse. Wich in fact was the worse abuse.I have done therapy and read extensively on these topics to try to help myself heal.It is hard hard work. sssssssssssssssome of the mental damage just can't be undone.My point is, Cathy Obrien in my opinion is authentic. You can find her on youtube speaking in conference on these topics. Have a heart .Take the time to listen. Rudinana

Cathy O'Brien is such a liar!!!

The people she is making accusations against!!!

Someone should sue her!

WHY DOESN'T ALEX HOUSTON SUE HER! HE COULD MAKE MILLIONS!!!

you are a disgusting piece of pointless life. the things you've done in your life to innocent people is horrifying. you don't deserve to live. you are disgusting.

Alex Houston doesn't have a page on Wikipedia. When was he born and is he dead?

Alex Houston is a close relative of mine. He is still alive but is being taken care of by his wife. None of the accusations about him are true, Cathy is completely and entirely mentally unstable, as Alex and all of his daughters and grandchildren can confirm. I'm saddened to see that the legacy of someone I love has been destroyed by one crazy lady in his last years of life.

Mark Phillips provides a scanned document showing one W. Alex Houston resigning his post as a president of Uniphayse. Is this fabricated? Why is Phillips picking on Alex Houston, of all grade C and grade D entertainers?

Why doesn't Houston sue Phillips for stating that Houston is a vile pedophile and supporter of CIA prostitution and drug running?