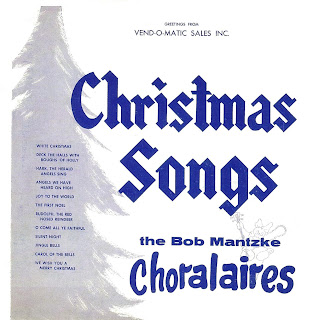 Of all the albums and singles I've offered this Christmas, this might just be the most plain, the most obscure, and the least likely to download album in the whole pile.

Back in the 1960s, Bob Mantzke was a religious leader of choirs in Minnesota and issued several albums (which can be found on eBay here and here).

His leadership caused his Choralaires to win the Llangollen International Musical Eisteddfod Folk Festival back in 1961 - the first U.S. choir to win that competition. Only three U.S. choirs have ever won in Llangollen and Mantzke's won it twice!

Other Google searches show that Robert Mantzke (minus the Choralaires) wrote several Christmas musicals for kids that can still be licensed for performance.

Whether or not Bob is alive or dead is a mystery. So is the fate of Vend-O-Matic Sales, Inc - the company who issued this album some time last century. If anyone can fill in the blanks out there, drop us a line.

The music? If you're looking for a choir standing in front of a microphone with an accompanying organ playing all your standard Christmas fare with some occasional surface noise from the album, then this is for you.

Smile and sing on the beat:

Bob Mantzke died sometime in the 8os. He played the part of The Old-Timer for many years in the Medora Musical, set in the Badlands of North Dakota.

Anon - Guess Mantzke's love for music led him to the stage... Thanks for the update!

For more info the "Medora Musical", type those two words into Google and see what you get. Looks like a ripsnortin' good time!

Thanks so much for posting this. I was going through some old albums and found 365 Days of Christmas Each Year - the first musical I was ever in, at 6 years old. (I had one line.) It's sitting in my lap while I type this.

I had to find out more. But Wikipedia has nothing on the album or on Mantzke. So this blog was very helpful. Thanks again!

I sang with the Minneapolis Choralaires from 1946 until 1954. The group was first called the Bob Shaw Club in honor of Robert Shaw, who politely asked Bob Mantzke to change the name of the group in the late 40s. My husband and I were good friends of Bob and his first wife Janet so I can tell you any number of things you might want to know. Bob was originally from Minneapolis but moved to California after his divorce in the 1960s.

Anon 3:43 PM - Thanks for visiting and adding more info to the puzzle known as Bob Mantzke! Any idea when this album was released?

Bob passed away in 1987 and is remembered fondly. I had the privilege of being his niece. A Google search led me to your page. Thank you for keeping Uncle Bob's music alive!

Suzy - From the previous comments it sounds like your uncle touched many a person.

Thanks for the kind words and I'm glad to help keep Bob's music alive!

I sang with the Minneapolis Choralaires during the summer before my senior year in college and experienced the most profound love of singing for Bob Mantzke. We sang in the Aquatennial program that summer and I was chosen to sing backup for Guy Mitchell - what a thrill for that young woman! I will always treasure that summer of great singing and will always be grateful for the wonderful opportunity.

Anon 10:55 - How many people can say they sang with Guy Mitchell! Thanks for sharing those precious memories!

I am the son of Bob's sister, Marilyn, who resides in Glendale Arizona. Bob and his music has touched many life's.

Bob's legacy lives on through his two daughters Kim and Tina. Google "Christia Mantzke" for information about Bob's youngest Tina.

Richard - Glad to hear the Mantzke legacy has been handed down to Kim & Tina! If they ever record a Christmas album, let us know!

I sang with the Choralaires in 1961- 63 and was priviledged to have Bob sing for our wedding in Granite Falls. My wife Sandy sang with the Northwestern Hospital School of Nursing Choir, which Bob directed. Our memories are vivid and precious. Tom Clawson

Don't remember the year, but Bob was our choir director at Bethlehem Baptist Church for some time when my mother was church organist. What I remember most clearly was our easter music "Christ Lag in Todesbanden" which, with my mother's help, I was able to learn well. I think that piece might have been a bit heavy for our church. I now sing with the Saint Croix Valley Chamber Chorale (Carol Carver director) and we are doing the same piece as part of our Bach concert this spring (Aprl 30, 2011 - Trinity Lutheran Church - Stillwater Minnesta). After fifty or sixty years gone by, I still remember quite clearly a few lengthy and complicated phrases from that piece. Bob was great
Jim Scheibe

What year was this album from?

My late father John H. Peters was a founding member of the Minneapolis Choralaires. Before the Choralaires, Bob and my father formed a quartet called The Harmony Kings which went on to win first place in the Minneapolis Aquatennial Music Festival.

Bob Mantzke was the Director of Music for the Minneapolis General Hospital Choir during the 60's. We student nurses held him in VERY high regard and think of him..we had many concerts and rehersals that he directed. He was a lot of fun.

Bob Mantzke also was choir director for First Baptist Church of Reseda in Reseda, CA and a dear friend of my father, Al Mooney. My father grieved heavily at Bob's passing - in a way I have never seen him suffer before or since.

I've been living in North Dakota for several years and attended the Medora Musical for the first time this past Sunday (Aug 19, 2014). This is the town of Medora's 125th anniversary and the Musical's 50 year anniversary so they were honoring past performers in the form of narratives, huge painted images and songs. I was stunned when the first artist they recognized was Bob Mantzke...I later called my dad and we teared up as we reminisced over this dear man. I remember him with his two young daughters: how he loved those girls. On one visit to Lake Delores (a desert water park in San Dimas), he lost sight of Tina and was absolutely beside himself - once he had her back in his arms it seemed he might never let her out of his embrace.

Though I knew nothing of his history in the mid-west, my dad knew it well - and to us he was a legend. My dad often said there was no one like Bob: he could take a group of non-singers and turn them into a choir in 15 minutes - and they could sell records. One of our favorite recordings is of Bob singing "Ain't Got Time to Die"... and we still wish he didn't <3 (M. Lima)

My mother and aunts sang with the Choralaires in the 50's. I would love to see some photo's if anyone has any to share, or could tell me where to look. Did anyone sing with the Wolf sisters? Kathy, Janie, Irene. Please contact me if you have photos, recordings, or stories to share! Thank you.
Jennifer
jenlincoln@yahoo.com