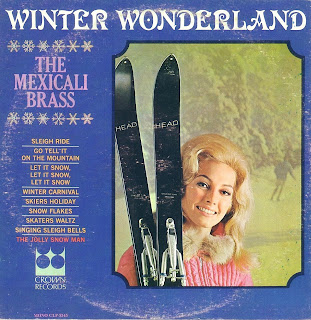 In January of this year, I reviewed "Christmas Brass" by Monterey Brass, an album I found at FaLaLaLaLa last December.

In that review, I listed a number of albums that were released in the wake of Herb Alpert & The Tijuana Brass' "Christmas Album" in 1968. The LP you see to the left was even mentioned in that review:

"Mexicali Brass - Winter Wonderland (I just found this at my local Goodwill... will post soon!)" Better late than never!

This is one of three albums I know of released by the Mexicali Brass - "Jingle Bells" (released with many covers) and "Christmas With" (available at FLLLL).

Of the nine songs on this album, there's three you'll recognize instantly ("Let It Snow, Let It Snow, Let It Snow", "Sleigh Ride", "Go Tell It On The Mountain"). However, pay close attention to the other songs flavored with that Alpert / Tijuana Brass sound - little gems in their own right and great background music to all those homemade Christmas compilations.


Looks like iTunes and Rhapsody have this album available for download - therefore I've taken down my download link.  If you really want this album, click on the links to purchase far better versions of the music that I ripped and shared!

Hey Cap'n! Mine seems to have 10 tracks. Is that correct that yours only has 9? That's odd... Your cover looks like it lists 9 tracks where mine lists 10, but mine only adds the title track, Winter Wonderland. What's the story?

I want to thank you for sharing this. I bought this last year and intended to get it ripped to CD and cleaned but then my dad, who'd just had knee replacement surgery in November 2005, had begun to act really strange and as it turns out, it was because they gave him Morphine during his recovery which he was NOT supposed to receive. What happened was it caused his dementia, which had been somewhat dormant before, to emerge and cause him to be out of his head most of the time. Dad's dementia has only worsened since then and his "new" knee has become stiff because he cheated during therapy (the staff didn't watch him); he'd claim to do exercises but instead did almost nothing.

Over the past few months I have been helping mom with advice, products to help in the caregiving process, as well as visit and assist her with dad.

I am now acting as the "advisor" to my siblings and relatives as to when dad or mom gets ill or dad's dementia gets worse. I keep hoping to get my LPs out and transferred but either dad takes another turn, mom gets sick, or something else happens.

Thanx again for sharing this album!

Groovin' Dan - Is that good or bad?

Ernie - The mono only has nine tracks:

Unclear why they would leave off the title track on the mono. See folks? Another reason to go to Ernie's and get his copy!