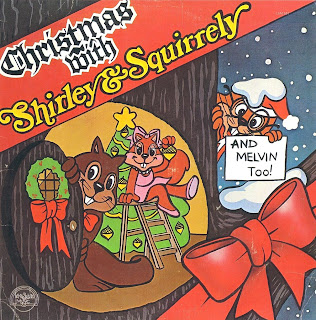 To quote from my review / posting of "A Pink Panther Christmas":

I don't particularly like kiddie Christmas albums. I never had them growing up at Christmas time and until last year, I never understood the fascination with them.

"At a Christmas party last year, a friend came up to me who received my annual Christmas compilation and began talking about Christmas music in general.

"'To me, that's Christmas.' he stated matter of factly.

"And there lies the secret of Christmas music. Many of your most intimate, favorite Christmas memories are forever interlinked with the Christmas music you remember as a child. That's why kiddie records like A Merry Monster Christmas and A Cabbage Patch Christmas remain for some as the most precious Christmas music of all time.

Shirley & Squirrely is the only out-and-out kiddie Christmas album I have to offer this season. This entry into the Christmas singing rodental department ranks way below the Chipmunks and the Nutty Squirrels but way above Woody The Woodchuck. The album has a country/western feel to it and you can easily hear the southern twang in the sped-up voices of the singers.

The back cover of this album tells many tales. Recorded in 1976 in Nashville, then released in 1980 on Lakeshore Records of Newport Beach, CA, it lists an address in Schaumburg, IL where you can order additional copies of this album (be still my heart) on LP, cassette, and 8-track!

Somewhere in this great land of ours - either in a shoebox at a local Salvation Army store or a landfill near you - an 8-track of this album exists!

I seem to remember reading somewhere that there were some singers on the Shirley & Squirrely things you would recognize now. The "Hey Shirley, This Is Squirrely" single (done during the "Convoy" CB radio craze) was a pretty big hit.

It makes me wonder if this is a rerelease and there is an original copy floating around out there.

Any ideas who the singers/players were?

I heard years ago that Janie Fricke was on there - she was just a studio singer at that time. The Shirley and Squirrely stuff was originally released on GRT Records, which was owned by Dick Heard - I think he is also listed as a producer. He is best known in country circles as being the producer of many of the hits of the late Mel Street (who was also on GRT).

WOW! Janie Fricke is originally from South Whitley, Indiana - about 1/2 hour from my front door!

Going to do a Google on GRT Records and Dick Heard!

I can harldly believe that someone other than my 12 siblings know who "Shirley , Squirrley, and Melvin" are. I am interested in obtaining a "CD" copy of "Christmas with Shirley & Squirrley(and Melvin, too!). I have the record, but have found no one who has the ability to transfer to a "CD". My kids can harldy belive that music can come from something like a record. They have never seen a real record player. At age 12 they really have no need for those things anymore. Please let me know if you can help me out with this. jfschr@tds.net Thanks much.....farmermom04

click the link where it says "shirley & squirrely" farmermom

I was wondering if you still have the shirley and squirrely christmas songs and if so if I could get a copy of them from you?
you can emial me at debusk@gmail.com

I am in search of shirley and squirrely christmas as I just loved listening to these songs when I was a child and I would like to give my daughter that same experience.

Anon 7:38 - I must admit I'm scared that anyone knows that much on S & S (j/k)! Thanks for the additional discography on Shirley & Squirrely!

I am taking a trip down memory lane and encountered an old record of Christmas with Shirley and Squirrely. I am hoping someone can help me find this on CD. I would really like to share this particular part of my childhood with my children and record players just don't offer the sound quality that a CD does.

Anon - Keep checking back - Christmas is only a few months away!

i gotta find this album to download....link is broken. any way i can get it from ya?

Could you repost this? With the holidays coming up, I'd love to get a copy of this one...